Welcome to my world!

Part of me updating my portfolio is going back to old shots and applying what I know now to what I did before.  And man, it's a doozy of an update.  In a nutshell, I went back and did lighting and camera for both shots.  I also went back and fixed a slew of timing issues, as well as touched on a lot of the animation, based on what I know now, versus what I knew then.

The Imp Mage one was always meant to have lighting, but the tests I did never matched the lighting concept I started with. The Leaping Thief animation got the most animation touchups and it had an ending added back in.

First up is the Dungeon Crawl Imp Wizard animation.  With the updated lighting, the drama of the monster in the shadows should hopefully read a lot better now than it did before.  He holds the glowing staff for a long longer now, giving time to see the imp's face, for the camera to shift, and for the viewer to see the monster's breathing, before seeing the imp's reaction.

Second is the Dungeon Crawl Leaping Thief animation.  This one needed the new camera and lighting, which meant adding a lot more of the background in.  I did a number of animation changes as well, such as covering his head a bit, as he runs through the traps.  But the biggest animation change is to the end;  I had cut out the original ending because the slow climb up just didn't match the cocky thief at the beginning.  I've replaced it with a dramatic ledge slip to show off that he knew the risk he was taking.

And since this one was missing a nice camera, here's the dynamic camera to go with the update!


This one is just a quick update.  I went through it and fixed all of the timing.  I've done a first pass to smooth out everything, and to doubly check the timing, since blocking does a great job at hiding it (I usually block in linear for that reason).  My next step is to go through and clean up all of my arcs, especially in that body.  I've done a bit of it already, but I have a lot more to do.

And for fun, here's a rough camera test, too.


Here's the current animation I'm working on.  I've been wanting to do a heavy sword combo for a while now.  Right now I'm still blocking it out, using a slightly different method than I have before.  So far I've learned a few things from this one:

1. Joe Daniel's Body Mechanics Rigs are awesome! They're worth every penny.  They have some great features that really show off body mechanics, such as the twisting in the arms/legs.  It does help that they are fairly blank.  Also, I always forget how ridiculously useful turning on and off body parts is.

2. Along those lines, I'm mostly in IK arm space for this one, it really helps to block the hands without the arms visible.  I can focus on where they need to be, then turning on the arms later, I can adjust them so the elbow actually works properly.  In fact, the left hand was the very last thing I touched in the video above.

3. Getting good reference isn't enough unless you are inspired by it too.  I mean, that's obvious, right?  I tried to jump into this one though, with some reference I had shot a month or two ago, and I was just struggling.  When I recorded some fresh reference though, I found the excitement that the old stuff just didn't give me.  I had to delete some old work, but it was absolutely worth doing.

I'll be posting an update fairly soon!
Posted by Jacob at 2:14 PM No comments:

It was for AwfulJams 2016, a game jam run by some goons over at the Something Awful Forums.  It's a month long, and this year's theme was "Games for Grandpa."

Coming into it, we had this idea to do a visual-novel style game.  We had an idea of the theme, but it wasn't fully announced until the start date.  Very quickly we shifted from a single-encounter visual novel with 3D characters, to a 2D Long Live the Queen style game.

The story, written by Albert, was that the elderly were getting taken over by the militant-style Millenials, being forced to conform, or otherwise mysteriously disappearing.  We worked in several different endings, such as Grandpa successfully conforming by passing the Millenial's test at the end, Grandpa successfully not-conforming (but still passing the test at the end), and Grandpa escaping with a certain multi-platinum singer songwriter best friend.

Check it out here: https://floteam.itch.io/grandfathered-in

Before I get into a bit of a post mortem, here is the art that I had worked on:

I drew all of the character designs, did the coloring/shading, and inked all of the game sprites, except for the linework in base grandpa, grandma Muriel, and his grandson, Jason.  Albert did the linework for those. 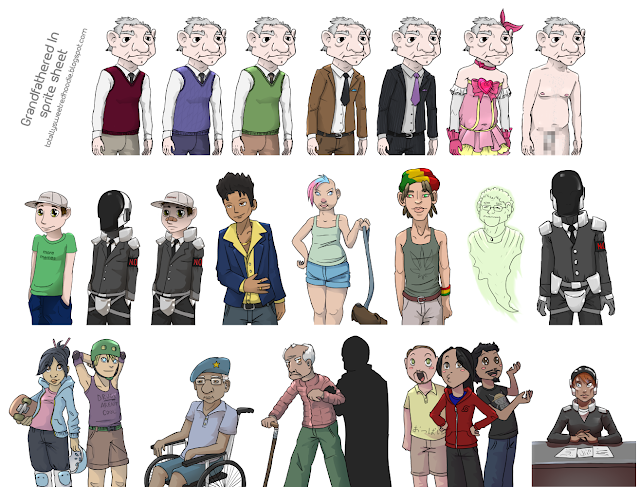 Here are some of the pre-ink-and-color sketches.  You can see some alternate designs here. 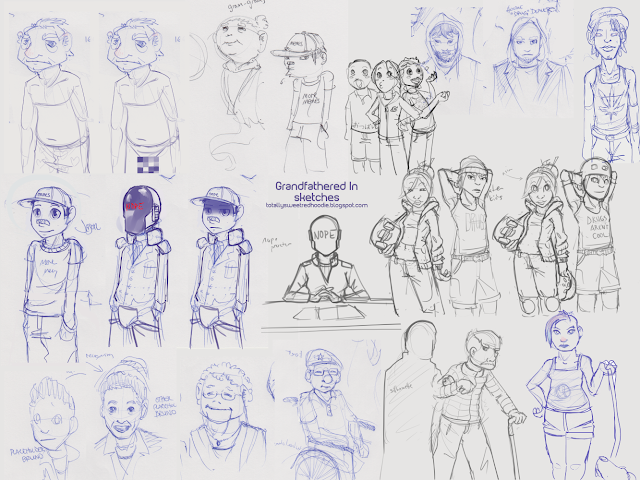 And here are the original Grandpa Horace sketches I did, when I was exploring style. 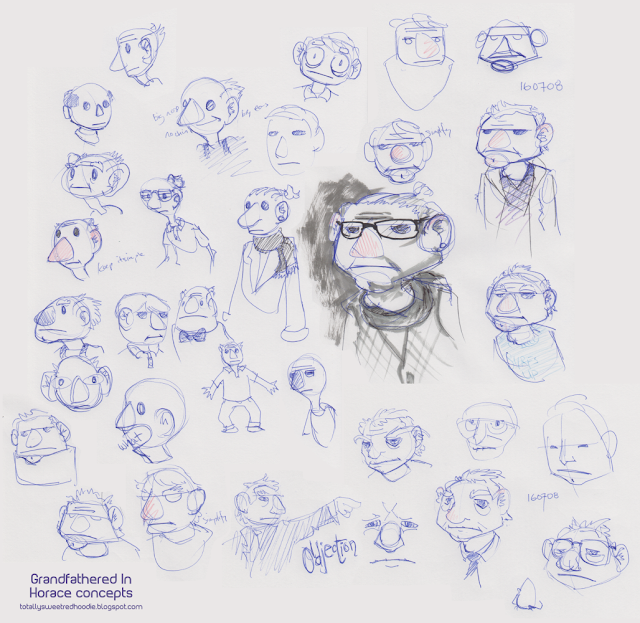 Into Cover and Wall-flip Animation


I've worked on this one for just two days.  I wanted to do that slide up to the wall bit; it's a good practice shot.  I actually think that part is working the best, and I'm looking forward to doing that smooth reload animation from my reference.  The flip though, this is where my reference stopped short.  I didn't decide what I wanted to happen at the end, because I didn't put the same amount of thought into that motion.

I ended up doing two versions of the end, a standing side vault (usually done from a run) and a flip.  Forgive the lack of timing on the first vault.  They do look cool, but I still have to decide what the story of the shot is; that's something that I should have already worked out, and now I'm suffering for it. 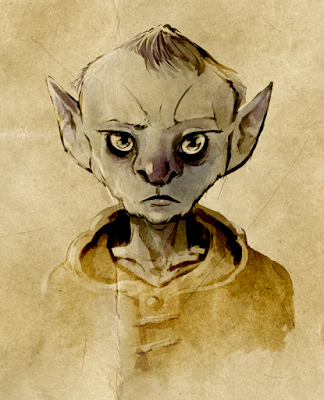 In my current D&D group, we're stuck in the Underdark.  To those who are uninitiated, it's just an underground world, with darkness-dwelling races, such as the deep gnomes.  My previous character, an English thug, didn't quite fit in this world.  So I've created this new guy, and had to create a portrait to go with it.

And frankly, I'm pretty proud of him.  I mean look at him, that's pretty awesome, right?  I don't do as much digital painting as I do animating, but I'm glad to see something really cool come out of it every so often.

Below is the original painting, before the parchment effects.  He's a slightly hairy deep gnome, and his thing is that he's whole-y plain.  He's not SUPPOSED to stand out in any dramatic way.  That's how he gets away with being a spy. 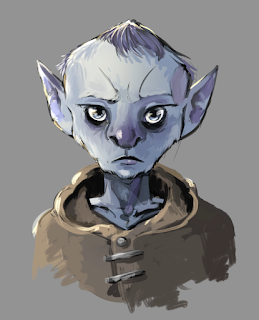 That title couldn't be more accurate.  I've been working on this basketball shot for a few hours.  It is based off of a video of a great deke shot with this hilariously cocky exit from the guy with the ball.  The blocking of the offensive player was easy, since he moved so dynamically.  The defensive player was a little bit more subtle in their movement.  All the same, it has a pretty good flow, though it still needs a bit of work:

So.... eventually I went on and did this.  Yeah... running poops and toilet paper.  Don't grow up, folks, life is way more fun that way.

I did a stream with Ryo again this week. The topic was genre swap, where you take one character, and remake them in a different genre. I decided to take my own spin on this, and redo a D&D character of mine as a sci-fi character.

My original idea was to do a meteor hammer animation. A meteor hammer is a Chinese weapon that is a weighted ball at the end of a long 6-foot, or so, chain. I had a D&D character that used a meteor hammer and I figured it might be a fun genre splash to bring it into a sci-fi setting.

I think this is a nice foundation for something, but this animation is just lacking punch.  My favorite part is the flow and the jump at the end.  The stationary swing could live on its own, and it's not very interesting.  The big swings are the cool part, but either the ball needs to stay on screen, or I need to change my camera.  I am going to revisit this one in the future, for sure, but the point now is that it's a one-evening animation, and I move on.

And join him on Twitch, every Tuesday and Thursday, at https://www.twitch.tv/ryotazi.
Posted by Jacob at 11:13 PM No comments:

My friend Ryoma Tazi streams twice a week, and he invited me to join him this Tuesday. While he streamed requests with the "Villain" theme, I animated my own villainous businessman who ends up putting out his cigar on a harmless fly. Goofy.

This was my first real test of Clip Studio Paint's new animation tools, just released this past week. I've been an avid CSP user since I started drawing on a Surface Pro 3, nearly two years ago. For the longest time, I have been looking for a good lightweight animation tool that works with multitouch, and also can handle the high pixel resolution of the Surface, at least with some sort of UI scaling.

I tried a number of animation softwares. Autodesk Sketchbook Pro had great tablet support, but it's animation tools were very limited. High end programs, like Toon Boom Harmony, have lovely features, but terrible resolution and multitouch support. So, I was pretty estatic when I found out CSP had animation tools coming, and they haven't left me at all disappointed.

Check out a sped up version of his four hour stream here: https://youtu.be/06ClbhcZfxY; and he was gracious enough to add sound and stick my animation to the end. I look forward to doing this again!

Also, check out his streams (currently Tuesdays and Thursdays) at https://www.twitch.tv/ryotazi
Posted by Jacob at 6:58 PM No comments:

New to the blog?

Start with some of my favorites: